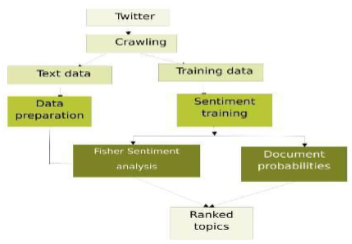 Detecting changes in a data stream is very important area of research with several applications. In this project, we use a method for the detection and estimation of change. This strategy mainly dealing with distribution change when learning from data sequences which may vary with time. We use sliding window whose size, rather than being fixed a priori, is recomputed according to the rate of change determined from the data in the window itself. This delivers the user to guess a time-scale for change within the data stream. In this project we tend to use jio tweets in twitter as data stream. Reliance Jio network offers cost free services; the 100% satisfaction of its customer could be a doubtful one. Though the customers are availing Jio services, they spend some amount for using other networks. If Reliance Jio fails to give the full satisfaction to its customer, it is tough to sustain its image in the systematic nation. Hence the study is undertaken for the aim of analyzing the satisfaction level of the customer of Jio network. From Twitter, we gather tweets using Twitter API based on keywords #jio. This project can verify the sentiment orientation of the tweets and also detect the changes in tweeted words in terms of frequencies by applying ADWIN sliding window algorithm. Further we can visualize these results by plotting graphs and can understand how many people are positive and negative towards jio.